BOUNCING MARKETS END THE WEEK POSITIVE:  This week, gains in shares of energy companies and some soaring initial public offerings helped increase stock prices overall.  Rising tensions in the Middle East and tepid economic data kept things in check, and the week ended barely positive.  After a difficult May, in which prices dropped approximately 6%, U.S. stocks have regained much of those losses.

CHINA SLOWING:  On Friday, economic data on Chinese industrial output was announced, and it added to evidence of slowing growth rates.  China is targeting a 6-6.5% GDP growth rate this year, which, even if achieved, would be its slowest rate in 25 years.  The factory output number for May came in at 5.0% higher than one year ago, the lowest reading since 2002.  This followed a 5.4% reading in April.  In addition, exports in May remained flat, and imports fell by 8.5%.  Home sales are rising, but the rate of growth slowed in May from an annual rate of 10.6% to 8.9%.  Furthermore, construction starts, more of a leading indicator, are slowing.  Consumer spending is doing well, but the Chinese economy is not driven by consumer spending as the U.S. is, but it doesn’t hurt to see those numbers do well.  Clearly the tariff situation does not help, but China has been struggling to keep its growth rate independent of that situation.  As the second largest economy in the world, China’s economic health will have a substantial impact on virtually every other economy on the globe.

MORTGAGE RATES REMAIN LOW:  Mortgage rates remained below 4% for 30-year fixed, with the average rate being 3.875 for such a loan.  See below for the trend that is clearly down. 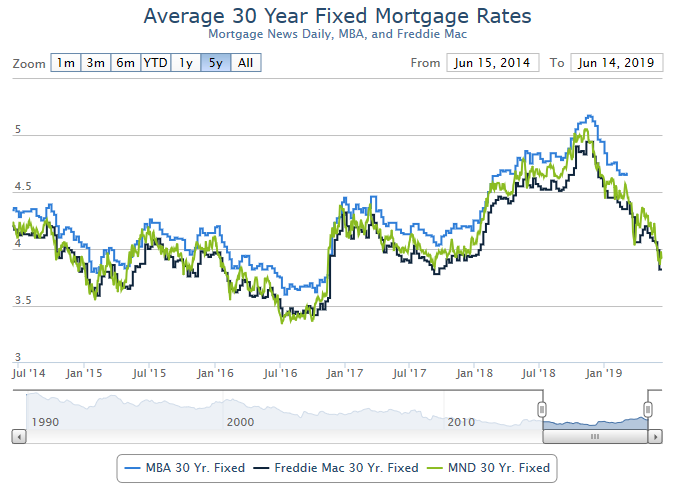 SOCIAL SECURITY.  THE THIRD RAIL:  Facing a funding crisis, the U.S. government passed a bipartisan bill in 1983 to keep Social Security solvent.  Next year, for the first time since 1982, the program will have to draw down assets to pay retirees all the benefits due them.  Unless a new political solution is reached, those so-called trust funds will be depleted in about 15 years.  Under current law, benefit checks would have to be cut 20% across the board.  Will our government wait the full 15 years to come together to solve this?  The main problem is that about 10,000 baby boomers are retiring each day and there are not enough younger people entering the work force to pay into the system to support them.  Life expectancy is increasing.  Will a compromise be reached in time?  History says yes, but under the current atmosphere, it does not seem like it will be soon.